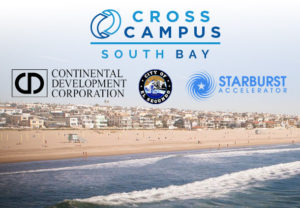 As we get ready to launch Cross Campus Downtown LA in March, we’re also looking ahead at growing our community throughout Los Angeles. So today, we’re excited to announce our fourth location—Cross Campus South Bay—slated to open around year-end.

We’re developing the project in collaboration with Continental Development Corporation, an El Segundo-based real estate developer that has transformed many dated aerospace buildings into modern creative office environments. We're excited to have as an anchor member Starburst Accelerator, an aerospace-focused startup accelerator—originally from Paris and now operating in Los Angeles and Munich, with a Singapore office slated to open later this year.

Adding South Bay makes a lot of sense for our members and for the LA business community as a whole: geographically, an El Segundo location complements our campuses in Santa Monica, Pasadena, and DTLA, and gives our members—who can use all Cross Campus locations—a great workspace option south of LAX and near the Beach Cities.

As with much of our history, this location has its own interesting story.

As our community expanded beyond the five hundred member mark, we noticed that some members were making the trek from as far south as Long Beach to work at our Santa Monica campus. We were flattered, and took notice. When we looked deeper into South Bay’s demographics, we were excited to see a lot of what we had observed at our other locations – high density of creative class professionals, great retail and hospitality amenities, innovative companies in apparel, design, entertainment and aerospace, great transit accessibility, and beautiful beaches nearby.

Last summer, we were introduced to Starburst Accelerator, an aerospace-focused startup accelerator doing awesome things in Europe and looking to bring its program to the US. Co-founders Van Espahbodi and Francois Chopard are incredibly passionate about aerospace and it didn’t take them long to convince us that the stars were aligned (pun intended) for LA to take off (pun #2) as a hub for aerospace innovation.

The timing was right, but the location also had to be right. Van and Francois’s vision was for Starburst to be embedded in a dynamic coworking environment somewhere in El Segundo so that program participants could benefit from being a part of a broader entrepreneurial community but also be close to companies like SpaceX, Boeing, Raytheon, and others.

Problem was we didn’t have any plans for an El Segundo location.

That changed when Van introduced us to Richard Lundquist, the principal behind the El Segundo based real estate developer Continental Development Corporation. Richard showed us around the neighborhood and described the vision that drove him, and his father before him, to transform dozens of under-utilized aerospace office buildings into remarkable creative office environments. We were inspired and awed by CDC’s track record of adaptive reuse and excited by the hub of office and retail that Richard had created around Rosecrans Avenue.

When I described our vision and mission at Cross Campus, Richard and his core team lit up. It became clear that there was philosophical alignment between our two companies and subsequently CDC made an equity investment in Cross Campus.

In the fall, Cross Campus, Starburst Accelerator and CDC began to work in earnest on developing the South Bay project. We identified a building at 840 Apollo Street that has the right attributes to support the kind of work, event and hospitality space our members love. And how apropos to have the Starburst program headquartered on the street where the original Apollo spacecraft was built!

So why are we so excited about Cross Campus South Bay?

Foremost is the opportunity to work with great partners: CDC, an experienced, visionary developer that is transforming a traditional office building into an iconic home for the Cross Campus experience; and Starburst Accelerator, a springboard for companies looking to shake up the aerospace industry.

Beyond that, there is the incredible location. Less than a block off of Rosecrans Avenue and at the center of amenities like shopping at The Pointe, ArcLight Cinemas, The Bay Club fitness center, and dozens of restaurants and bars.  For those who drive, the location is easily accessible from freeways and will leverage our proprietary valet parking system to provide unlimited parking for members. The light rail stop at Douglas Street is only a five-minute walk, and is expected to connect to the Expo Line within the next few years. And we finally get the opportunity to incorporate a design element our members have been asking us for from day one – outdoor workspace.

It’s too soon to describe all of the amenities at Cross Campus South Bay. We’re working on cooking those up right now and will start to release renderings and details later this year.

Click here to stay in the loop on launch updates for Cross Campus South Bay.