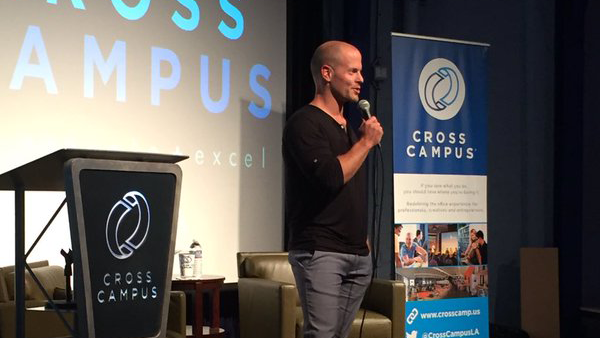 (As we close out 2016 and launch our new website, we’re reposting some of our favorite blogs from the past few years. This entry is #2 on our Top 10 list.)

Tim arrived at the event with tons of energy, ready to answer every single question that came his way from a crowd of devoted fans and Cross Campus members.

Below are a few highlights from the night:

We'd like to thank Tim for hosting his first LA meet-up with us! If you weren't able to attend this awesome event, see photos here and tweets from the night below.

@multitude27, from Dallas, heard this am that @tferriss was coming to @CrossCampusLA tonite. So he got on a plane! pic.twitter.com/EJW12fA6TO — Blair Golson (@blairgolson) January 14, 2016*

Came out from Dallas to see @tferriss at @CrossCampusLA crossed a goal off I've had since 2012. #bucketlist @theburiedlife #goals — Brendan McCaughey (@multitude27) January 14, 2016*

"Don't overestimate the people you look up to because what you see is the highlight reel." – @tferriss @CrossCampusLA — Alexander Lee (@alexanderlee1) January 14, 2016

Excited to see @tferriss in a few - Am a big #4hourworkweek fan! Thanks @crosscampus With @josecaballer pic.twitter.com/d1qeR92Arq — Rocio G Villalobos (@rociotweets) January 14, 2016

@tferriss - Thanks for your generosity and stories at @CrossCampus tonight. Argentine conversations to be had! pic.twitter.com/Xvedhcr4ZS — Bob Walker (@rwalker1072) January 14, 2016

For more events like this, subscribe to our events calendar! Want to host your own event? Send us an inquiry now!