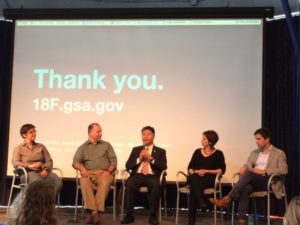 Cross Campus hosted an Emerging Digital Technology and Government Summit at our Santa Monica location on Monday, May 2. As the General Services Administration increases its efforts to bring new technology to the federal government, they designed the event to offer information on how to make federal opportunities more obtainable for smaller businesses and startups.

“A 21st century government depends on technology to serve the people. Therefore, it is imperative that government invest in innovative technology and cyber security. This can be accomplished by encouraging talented individuals in the tech industry to seek careers in federal service," said Rep. Lieu, who also spoke on the panel that discussed the need for more technology human capital in the government. The Congressman also hosted a Power Tech Talk that morning with 2 Cross Campus members RideAmigos and Heal, as well as one of our partners, Starburst Accelerator.

Honored to host the summit, Cross Campus Co-Founder and COO Dan Dato noted that "A healthy startup community and innovation ecosystem needs to include more than just entrepreneurs and investors, it has to include the support and participation of government at all levels--both locally and nationally. That's what's so exciting to us at Cross Campus about hosting Congressman Lieu, 18F, and the Emerging Digital Technology and Government Summit."

Check out our favorite tweets from the event!