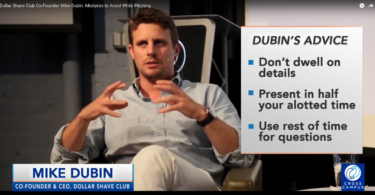 Dollar Shave Club Co-Founder and CEO Mike Dubin spoke on a variety of topics during an edition of Startups Uncensored, a fireside chat-style event hosted by serial entrepreneur Jason Nazar.

Mike and Jason sat down together in Dec. 2016 on the stage of Cross Campus Santa Monica.

Below we’re serving up a few highlights from their chat.

The Story Behind a Billion-Dollar Viral Video

Mike is probably best known for the starring role he played in a now-iconic promotional video for his company that went ridiculously viral in 2012 and launched his company into the stratosphere.

Here are some behind-the-scenes tidbits about the genesis of that video — including the surprising revelation that Mike didn’t even want to put the video on the homepage at all.

Competing Against the 800 Pound Gorilla

Mike was asked about the strategy his company employs in fending off competition from Amazon. We thought it was worth paying attention to, seeing as how Dollar Shave Club outsells Amazon (AMAZON!) in the category of men’s grooming products.

What NOT to Do While Pitching

Mike knows a thing or two about raising money from investors, having hauled in over $100 million before being acquired by consumer goods giant Unilever last year.

Here he discusses what absolutely NOT to do while making your case in front of the people holding the investment purse-strings: