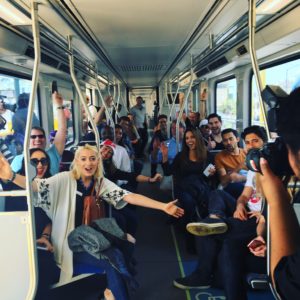 All of our locations are officially within walking distance from metro stations in greater LA with the grand opening of the Expo Line in Santa Monica.

At the day of the opening, Santa Monica members all boarded the very first train ride to Downtown LA. Members from our locations including Pasadena, Santa Monica and Downtown all joined together for our May Member Lunch on the 2nd floor of our new location. To learn more about events like this, make sure to subscribe to our newsletter!

See more photos from the event here & read more about the launch of the Expo Line here!

Check out what our members are saying about their trip:

Our friends @CrossCampus enjoying the ride to their #DTLA office pic.twitter.com/YgwEqVgx3e

We're celebrating the @expoline Santa Monica opening today with a trip to our Downtown LA location! #SaMo to #DTLA pic.twitter.com/gCeg30PbMP