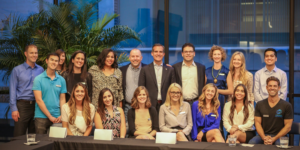 LA Mayor Eric Garcetti returned to Cross Campus yesterday to help us celebrate the launch of our Downtown LA location.

Addressing an audience of 150 Cross Campus members, investors and guests, the mayor charted the explosive rise of Downtown LA as a tech and startup hub to rival LA’s West Side...and even Silicon Valley.

Speaking with a tech-fluency that has long marked him as the industry’s favorite local elected official, Mayor Garcetti revealed his favorite apps (Instagram, My LA 311 and Go LA), and described his administration's efforts to strengthen the city’s tech infrastructure and increase diversity in the startup ecosystem.

(He also said some very nice things about Cross Campus’s past, present and future role in many of those areas.)

We were honored to host the Mayor and the Entrepreneur in Residence, and we are excited to continue helping to shape the city’s tech, startup and entrepreneurship skyscape.

Like I always say, #LA is a good contender for Center of the Universe @CrossCampusLA, #mayorericgarcetti Ma... https://t.co/N0X3qC9CZA

We are not one of the best cities in the world, we are THE best city @MayorOfLA @ericgarcetti @CrossCampusLA pic.twitter.com/KtCBFvPbee

So inspired by Mayor @ericgarcetti 's message on the importance of creativity in LA & how #DTLA is shaping history! pic.twitter.com/VV5bA5Wp8L

"I want #LA to be first place you can pay for all forms of #transportation with one #app" @MayorOfLA @CrossCampusLA pic.twitter.com/ARlpQl06iI

So proud that Los Angeles is home to one of the top tech economies in the world. pic.twitter.com/wOxYKyuisj