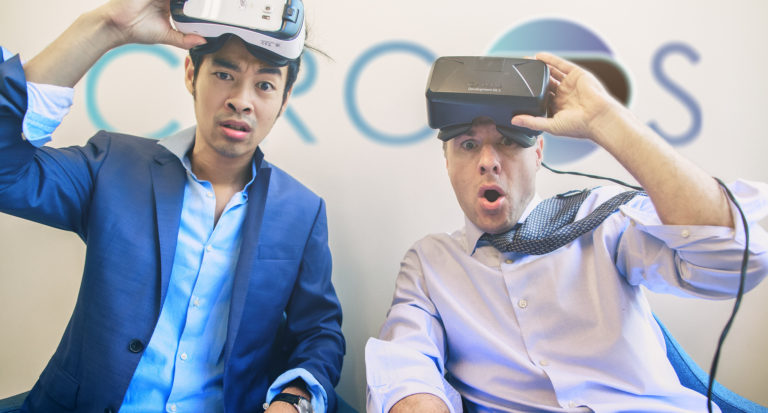 (As we close out 2016 and launch our new website, we’re reposting some of our favorite blogs from the past few years. This entry is #4 on our Top 10 list.)

Combining its ten-year history in both software development and content marketing, Circos has created the ultimate VR studio focused on the travel and luxury sectors. By providing cutting edge tools and creative expertise, it helps brands drive sales by thrilling and delighting their customers. The company operates a global team from offices in the US, Singapore, Greater China, and Japan.

We spoke with CTO and Co-Founder George Mitchell to bring you the inside scoop on life at Circos.

Q: In one sentence, describe who your company is and what you do.

A: Circos is a Virtual Reality (VR) content studio and technology platform. We work with brands to create immersive experiences for marketing, sales, and/or training applications.

Q: What is the problem you're solving?

A: In the last six months, thanks to sizable investments from companies like Facebook, Google, Sony, and Samsung, VR is becoming an increasingly popular channel for brands. But for brands looking to get their feet wet, there aren’t a lot of documented case studies, best practices, or how-to guides available to ensure that they take advantage of the medium.

Additionally, if you’re a filmmaker, photographer, or creative agency already experimenting with VR, there are lots of resources to help you create 360 video, but if you want to add interactivity, custom branding, or distribute on a platform other than Facebook or YouTube, you’re looking at some very expensive custom software development.

In the case of the former, our studio business works with brands to provide guidance and expertise in how to best leverage VR, including building bespoke VR applications from ideation to final delivery. In the case of the latter, we have a SaaS platform that allows users to upload their 360 photos or videos, add interactivity/titles/branding, and generate custom apps that can be distributed across various platforms.

Q: What brought your company to Los Angeles, and what do you like about the startup ecosystem here?

A: Los Angeles is the ideal geographical, cultural, and technical epicenter for our business. As Mayor Garcetti mentioned in his talk at the Cross Campus DTLA location, LA is the Western capital of the US, the Eastern capital of Asia, and the Northern capital of South America. With a large percentage of our team in Taiwan and Singapore, and numerous clients in South America, we wanted to be in a location that was a direct flight to so many key markets. Additionally, because the entertainment industry is centered in LA, we are able to collaborate with the brightest and most innovative artists, performers, and storytellers to explore what’s possible in VR. Finally, LA gives us access to developers who straddle the worlds of video, 3D graphics, and mobile computing on a daily basis.

Q: How has being a part of the Cross Campus community helped you or your business grow?

A: As a gigantic tech n3rd, I tend to spend a lot of time alone engaging in Reddit debates about the merits of vi over emacs, tabs over spaces, or why using the backslash is the absolute stupidest thing about the Windows operating system. It’s not hard to see why I wasn’t popular in high school. But Cross Campus provides an outlet for my inner extrovert. I love meeting the members, hearing their stories, and learning about their businesses. I always find their passion energizing.

Q: What has been your most satisfying moment in business?

A: Because I tend to geek out on some of the more esoteric aspects of technology, I’ve become quite adept at making business people’s eyes glaze over. My co-founders learned early on that, if they wanted to close the deal, it was best to avoid having me delve into the specifics of how we were using stochastic gradient descent to optimize our sentiment analysis. As a technology company that was becoming reliant on cutting edge Artificial Intelligence and Machine Learning techniques, I was finding it increasingly difficult to explain my job.

But all that changed when we made the move to VR. Virtual Reality taps into something universal; you don’t need to be a techie to get it. The last two years have been filled with some of the most satisfying moments in my career. I have yet to meet someone who isn’t amazed, delighted, or at least intrigued by how far VR has come and where it’s going. When we demo our content, I love seeing how people react and how they come away with ideas about how they can apply it to their business. And for the first time in years, my mom understands what I do all day long.

Q: Tell me about a time you failed at a goal you needed to achieve.

A: If we’re not failing in at least 50% of our goals, we aren’t pushing hard enough. With any emerging technology, the landscape changes so quickly you need to be nimble enough to course correct. That doesn’t mean we haven’t had moments where things appeared bleak.

When we first began experimenting with VR, we had an opportunity to demo some early technology at a luxury travel conference, and our booth was one of the most popular at the show. The organizers asked us to come back the next year and we committed to creating a fully computer generated hotel tour featuring haptic technology, such as an omni-directional treadmill and force feedback gloves. We set ambitious goals with the understanding that we would have prime booth placement and would reap the rewards in terms of sales leads. Nine months later, it became clear that the technology suppliers on which we were depending weren’t hitting their milestones, and the content we were creating was not sufficiently differentiated from the proof- of-concept we had already demoed. Despite having spent most of the year pursuing a concept based on a rendered environment, we found ourselves having to back out of our commitments and scrambling to recoup the cost of our R&D efforts.

But the story has a happy ending. Losing our prime placement allowed us to go back into stealth mode, and we decided to spend the remaining months experimenting with incorporating 360 video into VR. When we showed the conference attendees what we had done, they were blown away by the progress we had made. As technologists, we were focused on the latest and greatest tech, but as luxury marketers, the attendees cared more about how the content looked. They didn’t care that we didn’t have environments that you could manipulate—they cared that it was photorealistic. We ended up leaving the conference with enough business cards to keep us busy for a year.

Q: What are some of the characteristics of people that have been successful at your company?

A: People who have a hard time putting themselves into one box thrive at Circos. We are a company of hyphenates: art-science, geek-chic, East-West. We’ve had a PhD in Computer Science who’s a chef in his spare time, a filmmaker who moonlit as a financial analyst, and a Biotechnology major who’s also a world ranked Rubik’s cube solver. The consistent through- line is a passion for storytelling and a proclivity for coloring outside the lines. If you were the kid that was always answering the “I dare you to...” call, you’ll excel here.

Q: If your company were a Hogwarts house, which one would it be?

A: I’m pretty sure the sorting hat would implode if it tried to sort us into just one house.

Q: Who do you respect the most, and why?

A: Elon Musk. It’s not just the fact that he’s brilliant, or ambitious, or frequently described as a real life Tony Stark. It’s his ability to make people believe—not just in his vision, but in themselves, and the power of technology to change the world. He is also the ultimate hyphenate, combining seemingly contradicting qualities with ease: relentlessly driven but with a cerebral approach to problem solving; a singular vision but with a willingness to adapt; an interest in projects as sexy as going to Mars and as mundane as the power grid.

Q: Where do you see yourself and your business in 10 years?

A: Right now VR feels like filmmaking at the turn of the 20th century. Creators are still experimenting with what works and doesn’t work, and there’s a very collaborative feel to the whole industry. New kinds of stories and conventions are being created not just by ideas, but also by advances in the underlying technology. Within the next 2-3 years we will know if VR becomes fully mainstream or gives way to advances in traditional media or alternative technologies like augmented or mixed reality. In any case, we plan to continue to push the boundaries for how to tell stories that delight, transport, and fundamentally engage audiences.

In 10 years? Maybe I’m in Cross Campus’s altered reality lab hooked up to my haptic suit and neural interface feeling what it’s like to be on SpaceX’s Mars mission. Hopefully I still have most of my hair.